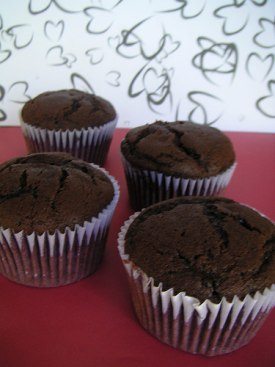 2Combine the cocoa and boiling water, whisking until it is blended and smooth and then set it aside for later.

3Combine the flour, Agave Nectar, baking soda and salt in a large mixing bowl. Add the butter and mix it with an electric mixer until it's crumbly.

4In another bowl, combine your eggs, almond milk, cocoa mixture (from step 2) and vanilla. Now take this mixture, and the one you made in step 3. Mix them together, but only 1/3 of each mixture at a time. Start by blending them together at low speed, and the at medium speed until it's smooth. Repeat 2 more times until they are all mixed and blended!

5Scoop the batter into prepared tins.

6Bake 15-18 minutes or until a toothpick inserted in center comes out clean. Remove and cool them!

1/2 a cup of unsweetened cocoa

1/2 a teaspoon of baking soda

3/4 of a cup of room temperature butter