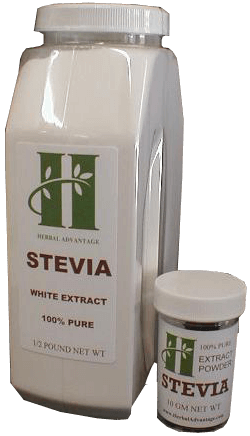 Discover The ‘Almost-Magical’ Benefits Of Stevia When Included In Your Regular Diet!

If you are a diabetic, one of the benefits of stevia is it’s ability to aid in lowering blood sugar levels. If you are not a diabetic, then it’s simple ability to keep you from eating that unhealthy refined table sugar will help increase the quality of your health by leaps and bounds.

Some of the main benefits of stevia are:

Stevia is an actual plant. You know, that stuff that’s…grown…in the uh…the dirt…

Obviously there are some brands of stevia that are very processed, but brands like Herbal Advantage sell the plant in it’s raw form (that you grind yourself), as well as a ground-but-not-refined form.

Some studies have shown that the insulin creation process in people who consume stevia, versus people who don’t eat it, actually instigates higher levels of insulin production.

For a normal person this doesn’t mean much. But for a diabetic who has trouble producing insulin in their body, this is a golden point.

No Carbs Or Calories

For those of you trying to lose weight, then look no further than Stevia for a healthy sugar substitute.

Not only will stevia not cause any weight gain, but it can actually help you to lose weight because it’s a 0-Calorie sweetener.

Seeing as you’ll be using Stevia instead of sugar (less sugar consumption), you can see how this would help you right?

For people that have high blood pressure, studies have shown that Stevia can actually help you to maintain a lower blood pressure.

In a study involving rats, Dr. M.S. Melis from the Department of Biology at the University of Sao Paulo in Brazil found that high dosages of Stevia lowered the rats blood pressure. This is not the only study that has been done, but it certainly is a conclusive one!

Did you know that when trying to quit smoking and alcohol, your body may cause you to crave sugary sweets?

Well the great thing about Stevia is that it actually tricks your body into thinking you are eating junk food (Because it is so sweet).

So instead of craving smokes or booze, your body actually becomes fulfilled by the stevia you eat.

A great way to take the stress out of quitting a harmful addiction, don’t you think?

If you drink a Stevia Tea, studies have shown that it can help to improve digestive function, and can even help to calm an upset stomach!

The Dangers Of Stevia (Is It Really Harmful?)

There are 3 potential dangers of Stevia, all inconclusive:

Most of the things listed here are only possible suggestions, and have only shown bad effects when Stevia is taken in massive doses.

That doesn’t mean that we should write these things off, but considering the amount of money in the sugar industry, I wouldn’t be surprised if some of these effects were blown out of proportion…

What The Tests Say (Good Things About Stevia)

Some of the good things about Stevia are:

So there definitely are a lot of advantages to using Stevia in your diet, especially when you are thinking about Stevia And Diabetes.

Japan has been using Stevia for over 30 years in commercial production. They’ve done hundreds of studies and tests on humans, and haven’t found anything wrong with Stevia.

The only reason I believe that there has been so much hype about it (The negative hype) is because there is so much Money involved (You wouldn’t want to put those artificial sweetener companies out of business, would you?)

I recommend you use Stevia in all of your food. I use it in all of mine, and have never had so much as a stomach cramp because of it.

Some may complain about the aftertaste, but Herbal Advantage has actually created a stevia plant (Through Cross Pollination) that eliminates the nasty aftertaste (As well as making it sweeter).