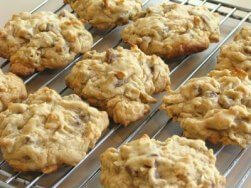 2In food processor, combine almonds and 1/16th a teaspoon of stevia. Process until finely ground. Set aside.

3Beat egg whites and salt at high speed until soft peaks form (with a whisk attachment). Reduce speed to medium and gradually sprinkle in remaining 1/8 of a teaspoon of stevia. Return speed to high and beat mixture until stiff and shiny peaks form. Now fold in ground almond mixture and the almond and vanilla extracts.

4Now roll this mixture into little balls (Using a tablespoon to do it, make each cookie about the size of a walnut). Push a single almond into the top of each cookie.

5Cook for about 25 minutes.

6Cool on a pan until it's cool enough to eat. You can either freeze them for a few weeks, or keep them on the counter for a few days. Try not to store for any longer or they won't taste as good.

3/16 of a teaspoon of Stevia Organic Extract Powder

1/2 of a teaspoon of pure almond extract

1/4 of a teaspoon of pure vanilla extract