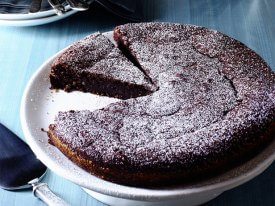 2Combine Almonds with Flour in a food processor until almonds are ground up.

3Place the chocolate, olive oil, and salt in a double boiler and melt together at low temperature. Remove from heat and stir until smooth and melted. Whisk in the egg yolks and 1/2 cup of the agave. Set aside.

5Bake until a toothpick inserted in the center of the torte comes out with moist crumbs ( 25 - 30 minutes).

6Cool and serve. You can put some extra olive oil on when serving if you like (Along with some more sea salt).

7Isn't that exotic? I know it was difficult, but it will be worth it!

3/4 of a cup of Unsweetened Chocolate

1/8 of a teaspoon of cream of tartar